SitSkiing today for the second time since my accident and the first time in 8 years!!! Snowboarding was by far my favorite thing to do for fun before my accident and I have missed it every winter since!!

After my mom first found out about Sit-Skiing, she bought me a lesson for the first Christmas after my accident. And as much as I was thankful for that opportunity…it was also one of the hardest days for me to face.

It had only been 7 months since my accident and I was so excited to get back on the mountains and try sit-skiing for the first time. I called the organization that my lesson was going to be with ahead of time and asked them if it would be possible to borrow the sit-ski after my two hour lesson was done so that I could spend the rest of the day skiing with my friends (with sit-ski’s, as with most adaptive equipment, you don’t have the choice to just go into a ski-shop and rent one for the day. Nor can you go into a Big5 and buy one for $100. If you want to Sit-Ski, you need at least $1,500 to buy one.) But thankfully, the person on the phone told me that they saw no problem with me using the ski for the rest of the day after my lesson. I remember hanging up the phone and being so incredibly excited I wanted to scream! So I called up all of my friends and told them about my lesson and made plans to go up to the mountains together so that we could all ski and snowboard. I was so excited to show my friends that I could still do things like this and to not only show them but also show myself that my life was going to be good and I was not going to give up.

When we got to the mountains all of my friends went up and started snowboarding while I met up with the people for my Sit-Skiing lesson. My friends and I planned to meet up when my lesson was over and go up the mountain together.

But as my two hour lesson was coming to an end, and after I spent the entire two hour lesson on a tether with the instructors because they said it would be a liability to let me go off the tether. I couldn’t help but feel incredibly frustrated, angry, sad, and hopeless as I just knew that whoever had told me on the phone that I would be able to rent the sit-ski for the rest of the day did not know what they were talking about.

I tried to not come across unappreciative because I knew that the people helping me that day were really truly just trying to make our lives (people with disabilities) better, by giving us opportunities to get out and do things, but I couldn’t help it, I was so frustrated with everything in life.

I was doing perfectly fine on the sit-ski and I just wanted to be free to go down the mountain on my own and enjoy the day just like everyone else. But that wasn’t an option for me. Everything in my life was already so confined to doing nothing but watch others do things and I could barely handle it as it was.

On the last run of the two hour lesson (one hour of which was spent getting the equipment right) I got to the top of the lift with the ski guide and right before we were about to head down I asked him if I was going to be able to borrow the sit-ski for the rest of the day. He told me they were not allowed to do that because it would be a liability. I couldn’t hold my tears back and I felt so stupid. Here I was at the top of the mountain, getting ready to go on my last run for the day, with a person who was out there trying to give me an opportunity and I was crying and looking so incredibly unhappy. I had already felt incredibly deflated throughout the lesson, every time that I was reminded I was on a leash and that was that, end of story.

I tried to pretend like I was okay, but there was no pretending. I tried to seem grateful…but I don’t know how they felt because I know all I could think about was how sad I was and about how much I didn’t think I had the strength to keep facing things like this.

When we got back down to the bottom of the mountain all of my friends were  there waiting for me, holding their ski’s and snowboards. They were all smiling and waving and so excited to see me. As we got closer they started asking me all sorts of questions about how much fun I had had, etc…but I couldn’t respond because I was trying to hold back my tears and the choking sobs that soon burst out of my mouth as they pressed on asking me what was wrong. I couldn’t even explain to them. The instructors were staring at me silently and I know they felt bad. My friends then asked me if I was ready to go skiing with them and I was finally able to tell them that I couldn’t go with them. I told them that I still wanted them to go, as it was only 11am and we had planned on being there for the rest of the day together. They resisted but I begged them to just go or I was going to start crying more.

They finally went off to the lift and left me there. One of the instructors brought me my wheelchair and got into it with tears rolling down my face. I tried to push but couldn’t move in the snow and thus needed even more help that I didn’t want.

Everyone at the mountain was staring at me with so much pity. and the pain I was feeling just wouldn’t stop. I tried to go hide somewhere at the lodge and hope the pain and tears would pass…but there was nowhere to hide. Everywhere I turned I was only reminded of the life I no longer had and the sadness I was feeling every single second because of it. And the people–their looks only made everything worse. I was, of course, the only person at the ski resort in a wheelchair.

I ended up leaving the resort and pushed to my friends truck that was parked in the lot farthest away from everything. The truck was locked and I sat silently beside it, let the tears roll down my face and thought about what I was going to do to get through this.

About 5 months after this experience, I learned about wheelchair basketball and I made that my focus for the next 8 years of my life. I applied for a Challenged Athletes Grant to buy my first basketball wheelchair and as I was focusing on making it to the Paralympics, I didn’t even think twice about trying to sit-ski during the winters as I didn’t ever want to risk breaking my arm and ruining of my chances of reaching my goal…but that doesn’t mean that I didn’t think about it every single year.

Well….I made it to the Paralympics 😉 and I made the decision a few months ago that I was going to sit-ski this winter. I even made plans to buy a sit-ski. I couldn’t let myself go any longer without it in my life.

I reached out to Alana Nichols (my first Paralympic athlete role model after my accident) and I asked her if she might have an extra sitski that I could borrow from her or even buy. She told me she would sell me her old one but that I just needed to get it to WA from Reno. I looked into shipping it and it was going to cost around $400 on top of the amount I was going to buy it for…not to mention the cost of lift tickets, etc.

I then soon after found out that I was going to be moving and I really didn’t have the money to do something like this. So I had to let go of the sit-ski idea once again and I was extremely bummed.

But then….this tennis camp happened…and with this tennis camp…I was told about the FREE opportunity to sit-ski with an amazing organization called the TRAILS Paralympic Sport Club with the University of Utah Health Care Rehabilitation Center.

It was truly an amazing day! Started with doing something I have been wanting to do for the past 9 years, Ski (snowboard 😛 on my own with no leash! …and ended with some Wheelchair Tennis with some more awesome people!

Let me tell you…these things are FAST!!! and are FARRR from regular skiing or snowboarding. Every time I tried to “shred” to slow it down…I only seemed to make it go faster! haha but I more than anything truly appreciated the opportunity that I was given today by this incredible group of people…the fact that they let me sit-ski on my own…not only blew my mind…but made me happier than they could ever possibly know 🙂

Thank you more than anything!!!

Good people, good experiences, good life 🙂 It is things like this that make you appreciate life and every single opportunity you get.

…I might have had a major wipeout where I flipped twice and broke one of the ski poles ….:P that was pretty crazyyy. haha it justttt might have been the clip at the end of this youtube video where my instructor starts sprinting towards me after I start going WAY faster than anyone was ready for (and not on purpose) 😛 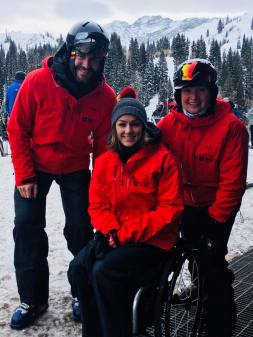 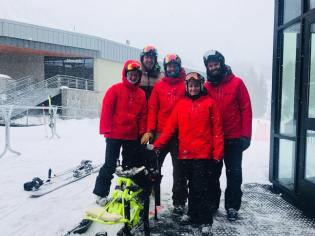 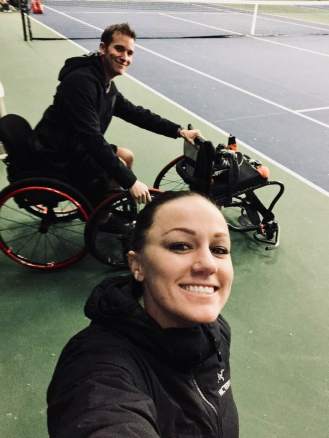 What doesn’t kill you makes you stronger 🙂

2 thoughts on “Sit-Skiing For the 2nd Time Since My Accident :)”