Despite her condition, Megan has maintained good spirits.
Photo by Karina Whitmarsh

By Jeanette Brown
Special to the Key Peninsula News
Family and friends of Megan Blunk have been busy planning the “Megan’s Day” fundraiser that will take place on Sept. 14 to help raise money to offset medical expenses Blunk incurred as the result of a recent motorcycle accident.

Blunk, a Home resident, graduated from Peninsula High School this past June.

On July 20, Blunk (18) was the motorcycle passenger of Cody James Venglar, (19) of Belfair; they were traveling eastbound on North Shore Road in the Belfair area at about 1:30 p.m. when the 1999 Yamaha YZ motorcycle left the roadway, striking a fence line and crashing into a concrete post.

Both Venglar and Blunk were flown to Harborview Medical Center in Seattle after being ejected from the bike. Venglar, who was in the hospital for about four days, is recovering from his injuries at his home in Belfair, according to family members; the accident remains under investigation.

Both of Blunk’s parents take turns giving her massages everyday, which helps to cut down on the pain in her feet and legs and decreases the amount of pain medication she requires. They credit part of her remarkable recovery to that of the “healing touch” and positive energy of massage therapy.

David Blunk said, “Megan is such a strong-willed girl, who is loved by so many people, and at this time she is anticipating a full recovery.” Megan has a reputation as someone who never gives up, he said.

David Blunk is a Licensed Massage Practitioner (LMP) and the owner of the Massage Studio located at the Inn at Gig Harbor. According to those who know him, he is well respected in the community for providing massage therapy to those suffering from cancer, sometimes for no charge, and has been in business since 1993. Blunk opened up his current business at the Inn at Gig Harbor in 1997, and the facility is donating the inside and outside space for the event.

Xochi Madera, the event’s coordinator, said, “We pray that Megan will be able to attend (the event) and knowing her fighting spirit, she will. The band will play a special song for Megan and cheer for her. I know how touched she will be when she sees and feels the outpouring of love and support from her community.”

Madera and her husband, Frank, are co-hosting the event, which will include live music by Roger Enders & The Road to Ruin and by the band Ken Rosholt & The Acoustics.  Event activities include a raffle, chair massages, a prize wheel and a classic car and motorcycle/bicycle show. 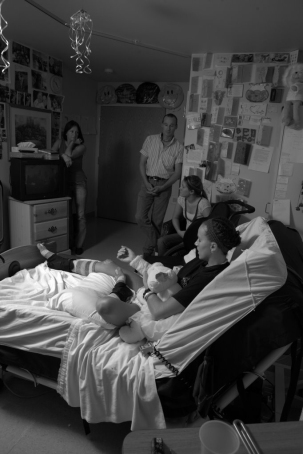 Megan Blunk and her family at the nursing home in
Gig Harbor where she has been staying after being
released from Harborview Medical Center.
Photo by Karina Whitmarsh

Madera is a longtime friend who herself recovered from a life-threatening motorcycle accident in 1995 before being diagnosed with cancer four years later. She said, “For many years David has worked on cancer patients for free, including me… since 1999. He also makes house calls to people that are too ill to come in and see him. As for Megan, she’s a warm, caring and compassionate young lady…who doesn’t disrespect people. She’s is just an awesome person to know.”Food will be available for purchase at The Inn at Gig Harbor and a portion of the proceeds from food sales will go toward the fundraiser.

Blunk is renowned for her athletic prowess and was involved in soccer, baseball, basketball, track, volleyball, and also participated in powder puff football. Her father said, “The family joke is that whenever we talked about Megan and sports, it was better to mention the sports that she didn’t do in order to explain the ones she was involved in.”

Prior to the accident, Blunk ran every morning to get in shape for soccer with her dog, Keelia. This past school year she attended Tacoma Community College as a Running Start student and was working toward her associate degree while completing the credits necessary to get her high school diploma. Her goal after receiving her degree was to enter a school of nursing.

“That is still my goal,” said a spunky and upbeat Blunk during a telephone interview.

“It is crazy how many people have been showing up, calling up and how they have been so supportive,” she said, adding that her boyfriend, Garrett Boone, has been especially encouraging. “He pushed me (in the wheelchair) to the Jamba Juice the other day, and I got a Strawberry Wild and he added protein to it.”

On the day of the accident, she and six other friends were on their way to Mason Lake to go wakeboarding and Megan’s friends were all behind the motorcycle and witnessed the crash as it took place. She credits her friends with saving her life by putting her on her back, as she could not breathe.

She remembers asking them to do it. She said, “Chelsie and Jake saved my live. It took them a while to find me, as I was thrown 30 feet through the air and landed down the hill without my helmet.”

Blunk suffered a broken lower right arm and hand. Surgeons had to place rods in her arm.  She also broke four ribs, and one of her lungs collapsed. In addition, she broke her back and left shoulder.  Surgeons placed rods in her arm and one in her back.

She said about her paralysis, “The doctors, don’t predict anything… but I definitely know I’m going to walk again and I think I am going to recover twice as fast as they think I am.  I can feel my shins again and name each toe now as it is touched.”

Blunk confirmed her plans to attend the fundraiser. “I am looking forward to attending the fundraising and seeing all my family and friends,” she said.