In the face of a life-altering motorcycle accident, Megan Blunk looks through the pain and frustration to remain positive. 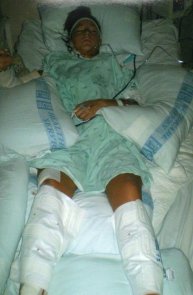 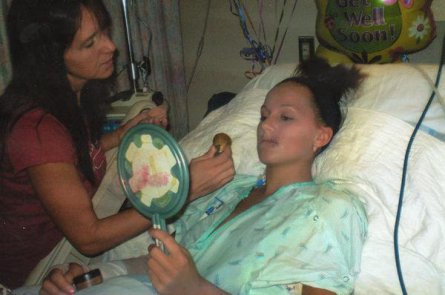 “This is what it is. I’m not going to waste my time being negative,” said Blunk, who graduated from Peninsula High School in June. “I’m going to grow so much and learn a lot from this.”

Blunk hasn’t had much time to consider her situation. She spoke last week from her hospital bed shortly after her third surgery.

On July 20, Blunk was a passenger on the back of a motorcycle in Belfair when the rider lost collided with a cement wall barrier. Blunk was thrown from the bike down an embankment.

Blunk was flown by helicopter to hospital and went immediately into surgery. She had one crushed vertebrae, fractured two to three other vertebrae in her back , broke her ribs and arm, collapsed a lung and received severe road rash.

Blunk’s main concern—and that of her mother Wendy Ricketts—is paralysis.

“(The doctor’s goal) is to get her to walking with braces, but Megan’s and our hope is for her to walk on her own”, Ricketts said, “She can feel her toes, but there’s no muscle movement.”

When Blunk woke from her first surgery, she said she couldn’t feel from her stomach down. Now, she shows visitors her “trick” of lifting up her thighs.

“It’s all coming back so fast,” Blunk said. “I think I’m past the worst part now.”

Before the accident, Blunk was an avid soccer player. She also wakeboarded and participated in numerous other activities.

“There’s nothing she doesn’t do. She just goes from one thing to the next,” Ricketts said. “She’ll just have to find a new way to be ‘Megan extreme.’ “

Blunk is finished with surgeries, but the recovery process is in its early stages. She has been taken to a nursing home where she will undergo months of rehabilitation.