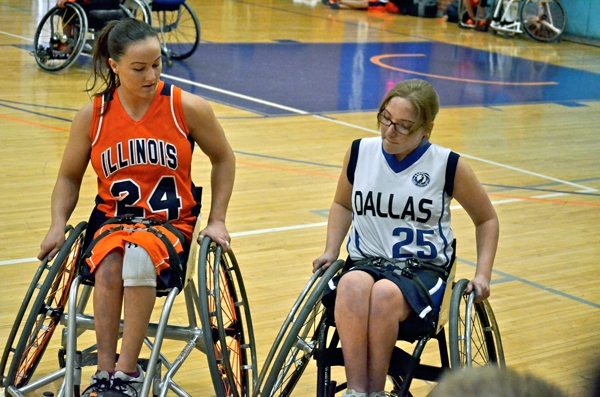 “I got into a motorcycle accident in Belfair,” Blunk said. “I broke my back and became paralyzed from the waist down.”

She spent the next two-and-a-half years in therapy, trying to walk again.

It was a rough time, but her friends and family rallied around her.

“Without our community – the KP and Gig Harbor people – she wouldn’t be where she is today,” said Megan’s dad, David Blunk. “There’s so much love and support among the people that it’s just amazing.”

At her mother,Wendy Ricketts’ urging, Megan said she got her degree from Tacoma Community College in 2010, but she wasn’t sure what to do after that.

“I was pretty sad and pretty lost. I cried practically every day. I thought I couldn’t really do anything any more, like play sports,” she said.

She tried playing wheelchair basketball for teams in Tacoma and Seattle, “… but it wasn’t as high a level as I wanted. I got really frustrated because I didn’t have the coaching and level of play I was used to. I had to learn to set up plays and to maneuver around people,” she said.

Then in the summer after her TCC graduation, Blunk went to a basketball camp in Texas and met coach Patty Cisneros.

“It was eye-opening,” she recalled. “She had a great attitude and was fun to be around. She taught me better mechanics and I played with college girls. They played really fast and helped me play at a higher level. I fell in love with the game there. Wheelchair basketball is the same game, but more strategic. It’s really a team sport  – you depend more on your teammates,” Blunk said.

When she returned home from the basketball camp, she searched for similar competitive opportunities and heard about a college camp in Seattle. She said a coach from the University of Illinois saw a lot of potential in her.

“He asked me to try out for the school. It was an eye-opening trip once again, because I never thought I’d go to a four-year university,” she said.

“I chose Illinois over all the other schools,” she said. She’s the first one in her family to go to college.

But a few months before she moved to Illinois in August 2012, fate intervened again and Blunk started rowing with the Gig Harbor Canoe and Kayak Club.

“Coach Alan Anderson has made a big impact on my life. He did everything he could and worked with me every day. I practiced every day learning to kayak, even though I couldn’t steer because I couldn’t move my feet,” she said.

“When I got down on myself, he’d ask if I wanted him to get out his violin. He treated me just like everyone else. That was pivotal in my life.”

After several grueling tryout sessions, on April 7 of this year, Blunk got word that she had made the Women’s USA National Wheelchair Basketball team. She’ll spend July and August at training camps and playing against teams from other countries.

“There will be tryouts every year,” she said, “and next year’s team goes to World in Rio, then the next team goes to the 2016 Paralympics. Each year there will be more competition than the year before.”

She’s also training for a kayaking tournament this May in Gig Harbor.

“Then I’ll go to New York in July to qualify to go to Germany. Then after that I’ll try to qualify for the World (Kayak) Championships,” she added.

Blunk, 23, has come full circle – from star athlete in junior high and high school, to accident victim, to budding Olympian in two sports.

She and her family credit their community for helping her get there. “I’m overwhelmed by the love and support the people of the Key Peninsula and Gig Harbor have given us,” David Blunk said.

“This whole experience has taught me how much strength I have,” Megan Blunk said. “I couldn’t have done any of this without my family and my friends. It’s what keeps me going. It’s the only thing that’s gotten me through this.”