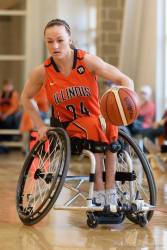 Illinois’ Megan Blunk gets ready to take a shot during the game against Alabama at the Activities and Recreation Center on Feb. 12. The Illini won 56-47.

Blunk, in her first Paralympics, scored 12 points in 24:58. Both are personal bests for her in the United States’ 65-15 defeat of Algeria in the last game of pool play.

Team USA had Algeria’s number throughout the entire game. Only four players scored the entire game for Algeria, compared with nine for the Americans.

The United States had a good handle on Algeria from the beginning. Team USA ended the first half with a 31-8 lead and allowed four Algerian points in each of the first two quarters.

The lead continued to grow in the second half, as Algeria scored a combined seven points in the latter two quarters of the game. The U.S. scored 20 and 14 in the third and fourth quarters, respectively.

Throughout the entire game, Algeria put up 11 three-pointers and made only one. The U.S. did not take any shots from beyond the arc.

The United State finished pool play at 4-0. Its next opponent and game has yet to be determined, but the team is expected to be at the top of the standings.